UN Treaty: Statement of the Treaty Alliance Germany on the Second Revised Draft

Since the United Nations Human Rights Council (UNHRC) issued a corresponding mandate in June 2014, an intergovernmental working group has been working on an agreement under international law with the aim of closing the legal gaps in the protection of human rights in business that have arisen in the course of globalization. In August 2020, the Ecuadorian negotiating leadership published a revised draft agreement („Second Revised Draft“), which has gained in stringency and clarity compared to previous versions and which largely meets the concerns expressed by the EU Commission and the German government. The draft forms the basis for substantive negotiations during the sixth meeting of the working group from October 26 to 30, 2020.

This year’s round of negotiations comes at a crucial time, as both at EU level and in Germany the development of legislation companies‘ human rights and environmental due diligence has been initiated. The negotiations on a UN agreement open a unique window of opportunity to create a level playing field internationally in terms of human rights and the environment.

Against this background, the European Commission and the German government should participate actively and constructively in the coming round of negotiations. In its statement, the Treaty Alliance Germany provides an overview of progress and the continuing need for improvement in the following areas:

3. protection of the environment

6. relation to other international legal standards

7. monitoring and implementation of the treaty 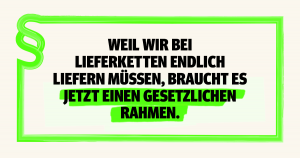